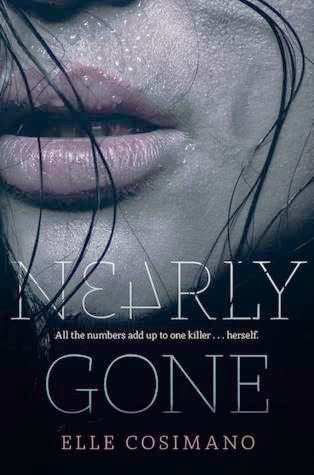 Nearly Boswell knows how to keep secrets. Living in a DC trailer park, she knows better than to share anything that would make her a target with her classmates. Like her mother’s job as an exotic dancer, her obsession with the personal ads, and especially the emotions she can taste when she brushes against someone’s skin. But when a serial killer goes on a killing spree and starts attacking students, leaving cryptic ads in the newspaper that only Nearly can decipher, she confides in the one person she shouldn’t trust: the new guy at school—a reformed bad boy working undercover for the police, doing surveillance. . . on her.

Nearly might be the one person who can put all the clues together, and if she doesn’t figure it all out soon—she’ll be next.

I must warn you first that I am really into bad boys in young adult literature. I don’t know why, but they thrill me. I suppose I liked Nearly Gone as much as I did because Nearly reminded me of myself in many ways. Firstly, I’m very competitive and serious when it comes to my grades. I constantly compete with the smartest kids in my class to set the learning curve (I fail most of the time, but I still try). Secondly, I love puzzles. They confuse the heck out of me, but I love them. Thirdly, Nearly likes bad boys. Yeah, I like bad boys as well.

The best thing about this novel is that I never guessed who the actual culprit was. I usually have a pretty good guess by the end of the novel, but by the end of Nearly Gone, I was completely lost because the person I thought was the culprit was completely and utterly innocent. I love mystery/thriller novels, therefore I was extremely glad that Nearly Gone actually made the reading experience enjoyable for me. I was literally on the edge of my seat while reading in the car.

The characters, in my opinion, were intriguing. Each one had a back story (except the thugs. I really had no idea where they were coming from, but then again, they’re thugs) that held weight and wasn’t just there. And the killer’s motive made sense at the end. Sure, it was a bit warped, but it made sense, which is all I really care about.

For a debut novel, I think Nearly Gone surprised me in a good way. I found this at Costco today, so I bought it, and I honestly didn’t expect to read it in one day. I’ve been in a reading slump lately, so to just pick up and book and polish it off like desert felt amazing. There were a few subjects not touched on like how Nearly could feel someone’s emotions when she touched them (I wish this was elaborated on a bit more), but in the end I don’t feel like I’m missing out on too much.

I really enjoyed the idea of narcs (Narcotics officer) being in this novel. After watching the movie Snitch, I’ve been interested in undercover criminals busting drug deals, so this book was perfect for me. I’m surprised to find myself waiting to reread this novel in the future since I don’t usually reread. I honestly really enjoyed it.

To touch on Reece’s stalker-like behavior a bit, it wasn’t all that bad. In his defense, he was told to watch over Nearly. It was only when it wasn’t a job for him anymore that it became a little creepy. He breaks into her locker to trifle through her stuff, forces her to kiss him in the hallway, and a few other things like that. Unsurprisingly, I still managed to liked Reece by the end of the novel. A lot. (Like I said, I have a thing for bad boys. So sue me. I’m a young teenager.)

In conclusion, Nearly Gone was an entertaining read, and it managed to keep my interest throughout the entire day, which books these days can’t seem to do all that often. I bounce between books a lot, but Nearly Gone kept me from doing that. I can’t wait to reread this book in the future. But I do warn you that if you’re a person who isn’t into bad boys and the justification of bad behavior due to hotness level, then this book isn’t likely for you. But who knows? You still might enjoy it as much as I did!

Hello!! Welcome to Bookish Affairs! We are three readers that want to talk about books :) you can contact us at bookishaffairs@gmail.com.